It’s a good question? How does nature throw up something which seems to cause nothing but misery and hardship? We may well ask why something as awful as COVID19 exists at all?

However, might we be making the same sort of assumptions about viruses we made about bacteria which in the public eye not so very long ago, were our arch enemies to be exterminated at every opportunity? 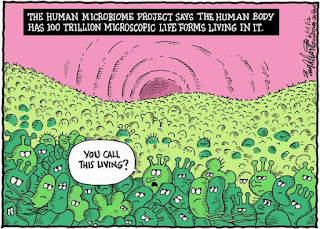 We now know more and more about the role of bacteria, For instance in our own microbiome, that teeming multitude of bacteria within our guts that provide us with many different services. Our little bacterial friends manufacture neurotransmitters, absorb nutrients and play an important role in our immune system. Its role is so important that our own internal culture of bacteria is sometimes looked upon as another vital organ.

Soil is teeming with vital bacteria and the seas too are full of them. So at every level bacteria are rightly seen as a big part of the jigsaw of life and we are learning more every day about the important roles they play within our bodies and around the natural world.

But viruses? What the hell are they for? Why indeed do coronaviruses and COVID19 even exist?

First, how did they come into being?

Viruses came into being, it is thought, from the random and varied deaths of bacteria, way back when the world was one big green soup, rather like that new ponds first stage of life.

When bacteria die their contents, including the limited list of ingredients for a virus, would be shed as they burst and around ninety nine point endless nines percent of the time that would be the end of that. 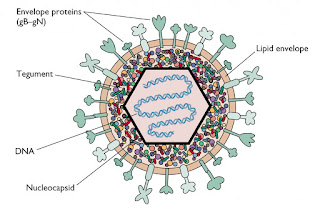 But just occasionally one might be smashed into bits and some of those bits, floating amid the the primordial soup, might just include genetic information and membrane.

The membrane might wrap itself around the bit of genetic information and Bingo! That is all you need create the first virus.

The chances of this happening of course, are minuscule, but over the course of a very long time and with untold trillions of bacteria on the planet, it was inevitable that a virus, capable of replicating would be formed, and that would be that, for ever.

Ever since then, these rapidly changing bits of genetic information have found their way into every living being, inserting their DNA into the host where it stays for ever and performs lots of functions. An example of this is the human placenta which would not function if it were not for viral genes. More on this later.

Suffice it to say that viruses are the oil in the wheels of evolution and without their genetic information creating variety and change, we would be something unimaginably different from that being you seen in the mirror.

So you and I are colonised with many viruses ourselves. We have been living with them since way before our evolution even into vertebrates, right back to early evolution of single celled organisms and their bundles of genetic information and protein building machinery first came into being.

Not just colonised though….

New thinking was needed after the uncovering of the mysteries of the genome, (I choose my words carefully). Our relatively few genes came as a surprise as well as so much that of the genome with seemed to do nothing and was originally called “Junk”. Much of this comes from viruses and is being discovered to be far from junk, indeed viral DNA plays many critical roles in how our genetic information is used.

So unravelling the genome has given us a glimpse into how these bundles of genetic material wrapped in the absolute minimum of membrane with as few additions as possible have accelerated evolution. While they are not alive in our sense of the world, they are the absolute tops in the reproduction league, which is also a fundamental definition of what constitutes life.

So, not only are our bodies teeming with viruses, but our genome is largely derived from millions of years of us meeting viruses which insert their genetic information into ours. If that works out badly, then it might be curtains for that individual, but it might also work our well, as I mentioned, making a membrane between mother and child without which the human placenta would not work.

The emerging world of viruses is stranger than strange. They have also shaped the modern world.

Of course, the colonisation of America, Australia and New Zealand were all accomplished by persecution and violence, but most of the deaths were due to infections unfamiliar to the original inhabitants; smallpox, measles and influenza in particular. The invaders carriage of deadly diseases destroyed whole populations in what in the case of the Americas, Prof. Stannard (an American historian) termed the American Holocaust – one of the most eye opening books I have ever read.

Further south, the first European travellers up the Amazon reported thriving networked communities estimated to number many millions along the river. Yet the next wave of invaders arriving a century later, who were unaware of their predecessors findings, described the complete absence of humans in what they thought were virgin rainforests. The whole population had been wiped out by the viruses left by the first visitation and any traces of their civilisation decayed and invisible to the the newly arrived plunderers.

The infrastructure of those times is only becoming evident with the destruction of the rainforest and subsequent mapping of the remains of this long forgotten civilisation from the air.

Our smallpox, measles and flu, all originally derived from crowded conditions and the herding of animals in Europe and Asia and absent in the Americas, effectively exterminated them.

So viruses have played a fundamental role in history as well as in evolution.

So why are they are seemingly living at peace with bats?

It might be useful to consider it from the bats’ point of view. We’re pretty sure thats where Sars-Cov2-19 came from.

Bats are more common than we think. They are also very good at sharing viruses. Why?

Bats and humans have history

It seems not only are bats widespread throughout the globe, but account for 20% of all mammalian species. They fly at night when we notice them least, they carry around 500 different coronaviruses as well as others like paramyxoviruses, influenza and hemorrhagic

viruses like Ebola. Viruses have been living and evolving with with them for as long as bats have been around.

Added to that, they fly considerable distances every night and they poop randomly as they go – and that poop contains a fair selection of different viruses.

The bat poo is eaten (accidentally of course) by animals; and some of these animals have some similar genes to us and the virus is able to enter their cells. Sometimes, when the time and place is just right, they make the leap from the intermediate host to another host with similar genes and close contact – us – often with little to notice, but sometimes causing catastrophe.

Of course, we could short cut all that random chance and hunt them, handle them and eat them. A daft short cut to transmission.

Once the combination of all these factors coincides with an infective virus which causes illness, particularly if many infected people are not even initially aware they are infected, the outbreak takes hold in the local community and we provide the rest of the pandemic ingredients with our crowding and hyper-mobility.

These genetic similarities make the jump between species more likely; so does our impingement into their habitats. Similar genes mean similar protein receptors which viruses need to gain entry to our cells.

The list could go on and on. But why are bats not troubled by coronaviruses?

Imagine a group of long established bats enjoying their space, caves and food – their own ecological niche. Just minding their own business until along come another group of bats (or humans) wanting to muscle in and take over. There will be skirmishes and battles as they 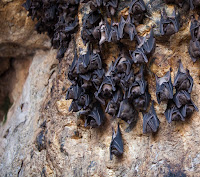 compete, but the secret ecological battleground will be who will infect who and with what.

The invading bats are unlikely to have come across the ‘home teams’ viruses to which co-evolved with them a very long time ago. Whatever the initial success of newcomers, they are likely to succumb to the viruses of the resident bats they are trying to replace, the invaders get colds, pneumonia or worse, and die out or retreat, leaving the resident bats alone to carry on hanging around and on their own evolutionary path.

It could of course, work the other way, rather like the Conquistadors whose most deadly weapon were their viruses.

In this sense, the viruses and the bats live together not only in harmony, but to each others definite advantage. The bats unwittingly provide a home for the unwitting viruses and at the same time ensure they have effective infective weapons against non-immune visitors, or populations they wish to replace. Evolution gives the virus-bat combo a distinct advantage.

The bats say thank you coronaviruses for making them invincible, and they in turn say thanks to the bats for give them a home.

It goes further than this potential evolutionary benefit. Some viruses simply insert their genetic information into the bat’s; annotating, if you like, the bat’s genetic instruction manual. Thus the bat’s genome is a mixture of bat and viral genetic information. The viral component of the genome does all sorts of things; some bad, but most very helpful indeed, in the bat as well as in humans, and indeed all other species.

Of course, once viral genes are inserted into the DNA of eggs or sperm (as they often are) in genetic terms the bat and virus have effectively become one and the viruses have become eternal. Well, as eternal as that species of bat. Hence my whimsical term, Corona-bat.

In ecological terms, the message might be to leave habitats and species alone, unless you want some very strange unpredictable things to happen. Corona-bats mean business!

Agribusiness is heading east, and it gobbling up land from the Chinese peasants and small farmers who farmed the land for generations. These displaced farmers resort to ‘speciality’ hunting, breeding and selling of wild animals. The coronaviruses of bats lie in wait and when the moment is right, jump species and again, human crowding and hyper-mobility does the rest.

This might serve are a warning to us as trade deals with the US might mean the writing is on the wall for many of our smaller farmers who are already struggling to make ends meet.

Wildlife farming is China is now banned, in a country whose authoritarian ways might make such laws stick. There have been calls to exterminate the bats as a solution to this problem! Hopefully such calls will be seen as hideously naive. Indeed wildlife experts feel that this dreadful approach might well help the next pandemic get going.

So for now, the bats are being left alone.

One bat might look at another again and wonder:

“Haven’t seen a lot of humans this year?”