Skip to content
You might well be wondering what is going on with herd immunity. I know I am.
Despite the ravaging of the worlds population and its brittle economies by Sars-Cov2-19, herd immunity seems to remain so far away as to make any realist wonder it if will ever be achieved.
It might be that lockdown and changes in our behaviour are having such a dramatic viral-avoiding effect that less that 10% of the population have positive antibody tests. In Spain, so hard hit early in the pandemic, antibodies are present in only 5% of the population, 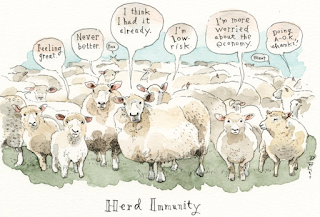 leading commentators to again state its achievement through policy is not only unethical, but unachievable.

Even in Sweden with their more relaxed approach to the pandemic and higher levels of mortality, the number of people joining the ‘herd’, that is those with acquired immunity measured by the presence of antibodies, seems stuck at 7.3% at most. It is fair to say as things stand it seems we will never reach herd immunity.
Over here I have called our tardy response to the pandemic “Herd Immunity by the back door” it now seems the back door is only very slightly open and herd immunity as far beyond the horizon as ever.
So, might we be barking up the wrong tree. Or indeed just one branch? Are we ignoring other branches we could equally well be barking up?

If you like, think of antibodies as molecular guided missiles, prepared and waiting for invaders they can recognise, at least until they get rusty and melt away, or the invaders get new

In terms of herd immunity, we have understandably focussed entirely on the development of these antibodies to the virus, something which usually happens after significant clinical infections or vaccination. This is called “Acquired Immunity” and is generated by B Cells – “B” as they come from the Bone marrow.
Fair enough, but to me something seems amiss. Lockdown has been a severe experience, yet there has still been plenty of opportunity for spread of the virus beyond the number of people developing immunity as measured by positive antibody tests.
One factor might be that immunity measured in this way is short lived. A small Chinese study demonstrated the disappearance of antibodies in 40% of infected people without symptoms and even in 13% of those with symptoms. Unsurprisingly, the more severe the infection, the more antibodies you develop and the better your defence next time.
That might be one reason why the numbers of people with positive antibody tests are lower than expected. Another more positive reason might be adequate immunity resulting from our immune cells which act without making antibodies.

Evidence from Sweden, suggests there may be more to COVID19 immunity than meets the eye. They found that many people who have been in contact with known cases, and even random blood donors, have developed specific Memory T cells which target the virus despite being antibody negative.
This happens when we create a certain type of white cell called T-cells. “T” because they derive from the little known and vastly under appreciated Thymus gland, quietly tucked away behind the thyroid gland in your neck. There are different types of T cells – here they looked at T

Memory cells, which are capable of remembering the proteins of the surface of previous viral or bacterial infections and so are enabled to react and defend us in the event of re-exposure.

It should be noted that the Thymus shrinks through life and as immunosenecense (ageing of the immune system) sets in it means there are less of these memory cells available. This mechanism therefore becomes less less effective as we age and is reflected in the increased impact of viral infections in the elderly.
The researchers discovered that these Memory T cells are able to recognise proteins unique to Sars-Cov2-19 and so organise the local resistance and destruction of the viruses, and remember doing so without the need for antibodies.
Further, it seems that these wonderful cells can recognise proteins on the surface of viruses due to past infections with similar viruses. In this case that means the more severe, though less transmissible Sars-Cov1, or even far more benign coronaviruses causing colds. This might have many benefits.

In essence, the immune system of many people who come across the virus is able to defeat it before it has a chance to do any damage or create significant symptoms. Either no symptoms at all or perhaps a soon forgotten day of feeling tired or lethargic. The virus is beaten off before it starts large scale replication or does enough damage to stimulate the immune response involving the generation of antibodies.
Further, Memory T cells do just that; they remember, and it seems they can last for years. We know this after Sars-Cov1. People infected 17 years ago still have

functioning populations of these Memory T cells which can recognise that virus but also similar proteins on Sars-Cov2-19 and thus confers what the authors term “robust cross-reactivity” active against developing COVID19. Some of these target proteins are essential for Sars-Cov2-19 to take hold and replicate.

In other words, if you had Sars-Cov1, it is possible you are protected against Sars-Cov-2-19.
Better still, though the numbers studied are small, the researches found Memory T cells in 50% of blood donors which had activity against some of the Sars-Cov2-19 proteins. This is despite the donors never having come across it or Sars-Cov1 or 2. This suggests that some of this pre-programmed defence against Sars-Cov2-19 might had been acquired after infection with common colds caused by betacoronaviruses, benign relatives of our most recent viral visitor.
Wow!
This might also partially explain why children and the young are not generally severely affected by the virus if at all; they come across lots of colds caused by coronaviruses and are thus, to some extent at least – ‘pre-armed” with relevant Memory T cells and protected. The memory might be less clear than for those infected with SARS first time round, but is is nonetheless significant.

Although the researchers justifiably call for more research, these findings are good news.
In short it suggests:
This might make little difference at the policy level; it still remains that many of us have weakened immune systems due to age, disease, lifestyle or low Vitamin D and are vulnerable.
However, I am beginning to wonder as to the use of “game changing” antibody tests. A positive test will tell us if we have antibodies and so have been infected, but will still miss many who have had the infection and done well. A negative test might suggest we are vulnerable, or for the same reason, it might not. They would tell us how many people have developed antibodies – that is only a part of the picture.
Testing for the presence of specific Memory T cells is too tricky for widespread use.
However, it might relieve us of the sinking feeling when we considered that well over 90% of the population don’t have antibodies to Sars-Cov2-19 and are thus thought to be vulnerable. This research suggests this might not be the case at all and we might have far more immunity than we thought.
How close are we to herd immunity? We don’t know, but we are likely to be closer than we think.

Our immune system is a thing of wonder. Its complexities are slowly unravelling and this is being accelerated by the pandemic. There are many other facets to our immune defences against developing COVID19. These include well designed interfaces with the outside world (skin, respiratory and digestive systems, etc), barriers such as mucus production, our own production system of antibiotic molecules as well as other many other active immune cells including phagocytes and macrophages.
So Memory T cells are but one branch of the tree of our immune system, but the increasing knowledge of how they help us survive the microbiological barrage from the outside world is a wonder to behold.
I have been on my own journey with this and the more I learn, the more I realise how little I knew, and how much more is to be discovered. More on this later…..

One thought on “Herd Immunity? It might be nearer than we think.”