Like us all, as the first COVID19 cases were notified in March, I wondered how things would play out.

I hoped it was going to be different from the 1918 Flu epidemic which hit the young so hard. Perhaps there were parallels with the 1957 “Asian” flu epidemic termed said to have killed “about” 30,000 people in the UK, 116,000 in the US and 1-2 million worldwide? More like SARS perhaps or MERS? This was a sobering thought as the mortality from those epidemics were 11% and 35% respectively.

Sars CoV2-19 (henceforth called COVID19) earlier cousin, Sars-CoV1 (now know simply as SARS) seemed the most comparable; its case fatality rate of 11% was scary. Indeed, that virus was less infective than COVID19. What were we going to be in for?

A grim thoughts, but I wondered if the best I could hope for it that it would prematurely end the lives of those whose lives were about to end anyway. How would I know? The Office of National Statistics is the place to go….a date with Data.

Exploring the site, it didn’t take long for the penny to drop. I was hoping to see that the total mortality rates were about the same as last year, COVID replacing flu and the other ‘normal’ causes of death. It soon became clear that this was not the case. 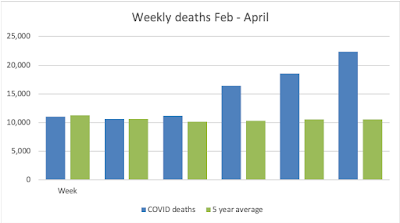 I read a report of the statistician who gathered the data, sitting with his head in his hands as the numbers come through. He had never seen weekly increases like this before.

His humane reflection on what lay behind the numbers on the spreadsheet was sobering. From the middle of March, the number of weekly deaths in the UK had doubled from the average of the last five years. For me, this really hit home. They report each Tuesday, the last (Apr17th) revealed an extra 12,000 deaths. More than twice that expected. Further, this was far more than the deaths from COVID19 counted in hospital patients.

Clearly more people are dying in care homes and in the community.

Now the ONS have looked at the effect of deprivation on COVID19 mortality and, sadly, but without surprise they reveal that in the most deprived areas, the mortality is twice in the most advantaged. However, this is not new. The effect has been forensically detailed in Marmots book “The Health Gap – the challenge of and Unequal World” and  Kate Pickett and  Richard Wilkinson book with the self explanatory title:  “The Spirit level – Why more equal societies almost always do better” . They both detail the harsh reality of poverty and how the effects of deprivation are to the disadvantage of us all.

This graph shows deaths from all causes over the same time and it’s clear the pattern is just about the same. 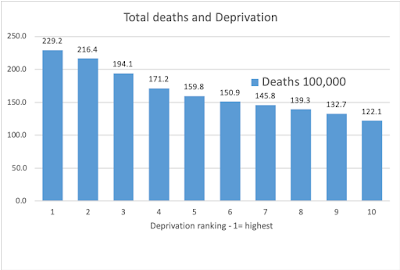 This shows the stark relationship between deprivation and general health.

COVID19 is bringing to the forefront of the worlds media and our minds an issue that has been playing out day by day, week by week for many years. Indeed, it has getting steadily worse in the UK in the last few decades following the improvement after WW2.

We will learn more as COVID runs its course. Right now, it looks like the UK and the US, the two most unequal societies in the world, are heading to the top of the mortality league.

Will the COVID experience bring more recognition of the advantages to us all of reducing poverty?

There is hope that better community networks could improve the quality of life in deprived area as the pandemic moves on. Public services are having resource thrown at them – these will be needed for some time – I believe for ever. Paying for them might involve a long overdue look at how, as a society we generate poverty and distribute wealth.

Perhaps this will put an end the decline of the public sector which has shown itself to be so essential for our society’s ability to face up to challenges, including the next epidemic. (More on that later)

Perhaps there will be more political recognition that poverty is no longer financially affordable in a modern society, even irrespective of the pressing moral imperatives; it is simply not practical.  It depends on what sort of civilisation we aspire to.

COVID 19 is exposing our structural weaknesses. Ultimately, perhaps our society would do better to judge its performance on the long term health and wellbeing of the population, our effect on the environment, and our long term sustainability.

Simply counting the amount of “Stuff” we can produce and buy (GDP) and making that our benchmark has surely had its day.

My date with data has been illuminating! We will meet again every Tuesday and we take it steady, learning as we go along!

The data up till the 24th April unfortunately show little change; 21,997 deaths in the last week compared to the five year average of 10,458. Sadly the doubling in the number of deaths is continuing.

5 thoughts on “Date with Data – deaths in an unequal world”