New US surveillance shows obesity is the biggest single reversible risk factor for severe COVID19 in younger groups and indeed is a major cause of the other big risk factors affecting older groups.

They found obesity to be the single largest risk factor in the under 50’s admitted to hospital and only overtaken in the older groups by hypertension and heart disease, which are strongly linked to obesity and diabetes which in many cases is caused by it.
Doctors are rightfully up in arms about the food industry and their part in the obesity pandemic and thus full ITU’s around the world.

So am I!
This post describes my experience of successfully helping people lose weight and with the COVI19 crisis is now more relevant than ever……

Anyone overweight or obese, and indeed anyone who buys sugar, read on.

Imagine if you will, sitting in a café in any city in the world. While idly people-watching, you notice two thirds of the passers-by have green, glowing ears! Imagine too that green-glowing ears were known to cause illness, suffering and premature death as well as bankrupting health systems and societies. It also worsens COVID and other infections. Then consider the main cause of green-glowing ears was discovered to be a specific, commercial food additive designed to enhance taste. What do you think would happen?

Well, I guess you would expect uproar! The media would immediately run angry sensational headlines; the government would dive straight in with prohibition, the manufacturers of the particular food additive would be sued out of existence, imprisoned even for manslaughter.  There would be self-help groups for the green-glowers; the problem would gradually disappear from ears and from the streets of the world to then be confined to the history books.
Or would green glowing ears could become the new normal, with the health and social costs accepted as the price to pay for tasty food and mega-profits?
You would think the former, but I would put my money on the latter. Why? Because in my surgery I witnessed this phenomena. Not of course green glowing ears, but people visibly poisoned by the food they ate. My patients waistlines were expanding, so too their suffering and my workload.
This is what has happened due to copious amounts of sugar added to our diet – our greatest ever act of human mass-poisoning. The obesity caused by sugar loaded diets have become engrained in our culture, visible on every street and now in every intensive care unit in the world. Its hideous effects largely accepted as a price to pay for commerce.
The “food industry, with a tiny grain of truth, argue it’s far more complicated than that. Its all about balance, they say, getting out more! Just do more physical work to shed the fat you deposit within due to their products and their profits.
By balance, they mean go swimming, for example. Burn up 300 Kcal in the pool, and then eat one of their 300Kcal products afterwards. That is the sort of balance that is tipping the NHS, and indeed society, into eternal overdraft.
I tried to get a handle on this at work.
Back in the mid-90’s I measured the height and weight of 100 consecutive patients to find my observations confirmed. 38% of my patients were obese, 37% overweight, 24% normal weight and one single person thin. This was reflected in the amount of arthritis, heart disease, diabetes, and other complaints that I had to help with.

Coupled with this there was a certain nilhism amongst colleagues as to how effective dietary advice really was. We seemed to do quite well with helping people quit smoking, but with diet, most of the time it seemed to make no difference. Why?
Well it might be that cutting down and stopping smoking is conceptually simple. You know how many cigarettes you’re smoking and how many you used to, and you know when you have succeeded. Targets and aims are black and white. Reduce, stop, celebrate and move on. With food it’s not so simple, there is confusion a mountain of contradictory advice.  How might this be tackled?
Off I went to the National Diet and Nutrition Survey to find out in a bit more detail what we are eating. An image caught my mind. It has been on my “lifestyle and MS” slide presentations ever since and is of even more importance today. Here it is: 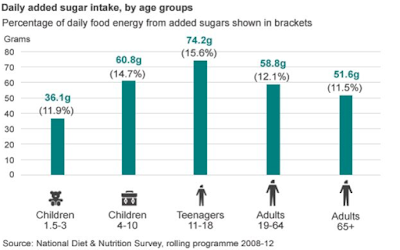 Putting this another way:
The average UK adult will eat their own body weight in sugar every four years.
The average UK teenager will eat their own body weight in sugar every two years.
The average UK child will eat their own body weight in sugar every year.
This sort of sugar intakes cannot be compatible with health.
The amounts of calories this represents had immediate implications for my day to day work and the day to day life of my patients.
As it this wasn’t shocking enough, the graph didn’t tell the whole story. These are averages.
My average patient had average health, the outliers did not. For every patient taking half the average, there would be one taking double. As ever, those deprived and living in poverty eat and suffered the consequences the most. The poor, are in effect, paying with their health for the profits of others. this might seem radical, but it is the simple terrible reality of our times.
I started to ask my patients how much sugar they were consuming. Not easy and not wholly accurate, but it went something like this:
Doctor:   How much sugar do you add to your diet?
Patient:  Not much.
Doctor:   Do you have any in your hot drinks?
Patient:  Yes.
Doctor:   How many.
Patient:  Not many.
Doctor:   How many
Patient:  Two.
Doctor:  How many hot drinks do you have a day
Patient:  (After a think) About 8.
Doctor:  Thats sixteen spoons of sugar a day.
Patient:  Yes, I suppose so.
Doctor:   That’s 320Kcal a day, about 12% of your energy intake.
Patient:  Is it?
Doctor:   Put another way, those calories are stored as 12Kg of fat, every year!
Patient:  Really!
Doctor:   I think I might have just found out how to cure your diabetes!
Patient:  Wow!
Doctor:   Can you stop adding sugar to your tea.
Patient:  Definitely!
Doctor:   Excellent, I’ll see you in three months.
Three months later….
Doctor:  Hello there. Did you manage to give up sugar?
Patient:  I did.
Doctor:  I’m delighted! Pop on the weighing scales please.
Patient:  Why do doctors always say “Pop”?
Doctor:   I have no idea.
Doctor:  Clamber onto the weighing scales please
Doctor:  You have lost 2.5 Kg!
Patient:  Brilliant.
Doctor:   Yes, fantastic, keep it up and see me again in three months.
Patient:  Will do, is there anything else I can do?
Doctor:   Sorry I have run out of time…..
Please note, it wasn’t always this easy.
The record sugar intake in my patients was an astonishing 600 spoons of sugar a week, with some very evident health consequences. Copious amounts of Lucozade the culprit in this case. This isn’t a matter of blame, I felt considerable compassion for people with this problem. I have to admit it became an obsession of mine. It still is.
After a couple of experiences like this, I started to record what happened after giving the following simple advice:
1. Stop adding sugar to hot drinks.
2. Stop drinking any soft drinks.
3. Identify sugar rich food products and get them out of your diet.
4. Save confectionary, biscuits, buns for special occasions, if at all.
5. Then cut down on spuds, rice, pasta.
250 patients and four years later this is what the spreadsheet revealed.
185 (74%) lost weight.
(Those who didn’t admitted to not having followed the advice)
Average weight loss was 7% of body weight maintained over 4 years
46 (18%) lost more than 10% of their body weight
40 (16%) were no longer classified as obese
3 out of 13 patients with diabetes were “undiagnosed”.
There were marked improvements in diabetes, hypertension, well being, and a wonderful sense of being in control of their own health.
Patients generally felt much better. So did I!
I will post more on this later, including the detailed written advice I used to give patients about sugar, energy, weight loss, diet and food.
Suffice it to say that when I was diagnosed with MS, I took my own advice. You can’t give it up completely; it is present in small quantities in some quite healthy foods, but getting the bulk of it out of your diet will get help you get rid of countless dangerous calories and kilos.
How about exercise:
Exercise it good for the body, if careful, and the mind. However, it a hard ask to use it to lose weight without reducing calories in the diet, as the following information shows:

In other words, it’s a great idea to exercise, but losing weight by exercising alone is a very hard, almost impossible thing to do.
What about a healthy diet?
This was not a part of my advice to patients. I only had ten minute appointments, so advice was confined, with exceptions, to the massive benefits of just not eating a terrible diet. There is more to be considered when it comes to a really healthy diet, and a multitude of opinions, but the first step to losing weight is not to eat a terrible sugary one.
What about fasting?
Fasting too is a really helpful way to lose weight and to stay or become healthy. There are a number of different ways of doing it. Speaking for myself, I don’t eat after about 6 in the evening and delay breakfast till 11 in the morning. I then take doggie out for a walk, as I get the feeling exercising in the fasting state might well bring added benefits. With no sugar in my diet and and daily fasting, I actually find it hard to keep my weight up. A handy dilemma to have in this day and age. More on this later….
The very last word…
The easy and most rapid way to improve your diet and lose weight is to give up as much added sugar as you can. Be below average! In doing that you will be doing your bit to reduce the national average.
Dare I say it? This would save lives and save the NHS!